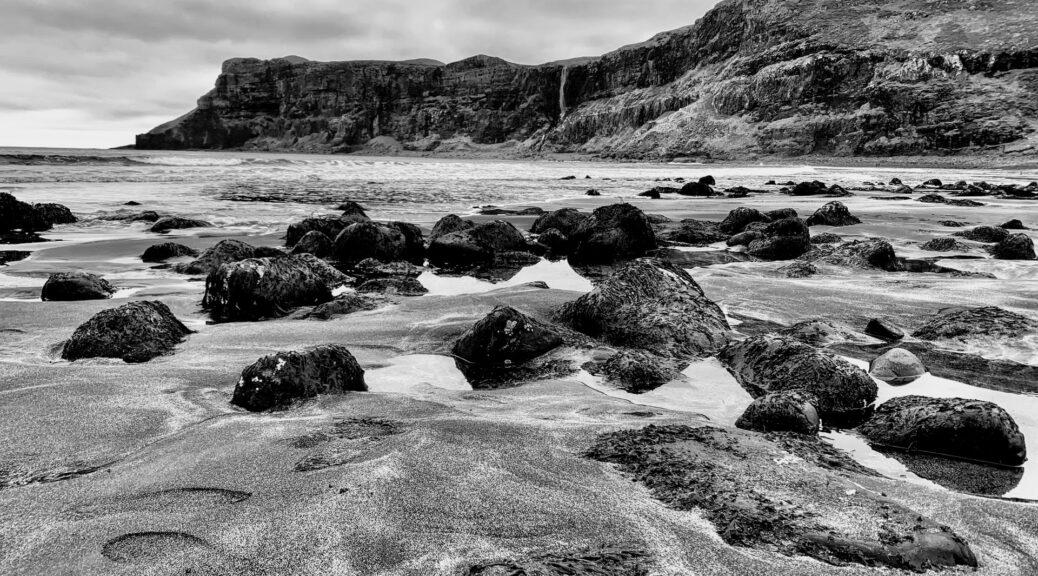 She had turned the other way at the crossing. Quickly she biked west on the 884 instead of going to the school in the village. When the tension of just going on without a definite goal became too great, she stopped and left the bike in the tall wiry grass on the hillside, then made her way down to the beach. She felt that she should go to the water’s edge. But she had to cross the stones first.

She carefully stepped from one big gray boulder to another, each of them protruding from the naked wet sand like small islands. It had not rained last night so the surfaces of the stones were dry and hard, unlike the sand below them which was continually soaked in the shallow surf that breathed in and out from. It wasn’t much of a hide-out here, she had to admit – probably only a few miles from the house.

Eventually mum would find her if she stayed here much longer. She knew mum would soon come looking. She also knew that pa – if mum had called him first –  would have told mum in no uncertain terms why it would be best for mum to find “the wee brat”. And without something else to do, except roam the house looking for dust and the remnants of a dream, it would for sure be mum who came a-looking. She wondered how much time she had left.

The red wristwatch which gran had given her for Christmas already reminded her that it was more than an hour ago that she was supposed to have been at her table beside Siné. She scolded herself for looking at the watch again. She should make a decision on which way to go – now.

But the truth was, she knew, as she stood still here at the edge of the indifferent gray-blue waters of the loch – that she could not decide where to flee. Maybe when she got older, but how much older? When you are 10 a year or two is a long time, and even then running away seems like a frightening liberation, like running into one dark room – away from another.

No! She could do it this morning! She could go back up the hill, pick up the bike, and … there was Siné parents’ boat down at the pier in Milovaig. She knew how to turn on the engine or make the sail work. Sinés father had shown her countless times. And Siné would understand … she hoped. So she turned to go back up – quickly stepping from one imaginary island to another, on the stones. She had been a fool to go down here first, to think about it, but she hadn’t been decided. And maybe … she still wasn’t decided?

She began running. If she moved quickly enough, perhaps she would outrun the doubt before it could delay her again. She couldn’t bear the indecision anymore. She had to try something. Unfortunately, immovable and dry as the stones were they didn’t exactly invite for a sprint. She had to slow down again when she almost fell.

That’s when she recognized the car up on the road. It stopped. Mum had spotted the bike. There weren’t many other things to spot out here, except a few lazy seagulls. Blast it! She might as well have put up a road sign for her mum on where to find her. Her mother stepped out of the car, slowly … as if she had seen a wild animal that she was now afraid of chasing away.

“We talked about this, with Mrs. Gregory – remember?” her mother tried, soothingly. “They promised they would leave you alone.”

“They lied. They’re nothin’ but a bunch o’ liars!”

“Come, honey – I’ll drive you to school. We’ll put your bike in the trunk.”

“I am ne’er going back ta school!”

“Should I phone dad, then? Let him pick ye up?”

“I’d rather be spanked a hundred times by pa than be chased by Rory and that gang o’ his one more time.”

Her mother thought a bit about it then said:

“Maybe we could go home and I could bake ye some of gran’s pancakes? Then I’ll call Mrs. Gregory and say ye are ill?”

Carrie stood still for a while, feeling under her feet the big smooth stone she had stopped on. It had been smoothed by countless millions of waves running over it, like an ancient rhythm repeating itself again and again. It felt as if it lay very still, but everybody knew that the stones and rocks were moved by the eternal surf, even if it was just a few inches a year. Where they eventually would end up was another question. But it was almost certainly in a fixed area near the beach or in the loch. There was nowhere else to move but within the fold, that nature dictated.

Unless you didn’t need the surf to move you. Maybe that was scarier, though, because even with a completely free choice you might just end up repeating the same old mistakes over and over, and end up at the same old shore where you came from. Then it would be your fault if you never got off the beach.

Carrie looked down at the stone she stood on.

“Okay,” she said and stepped off it. 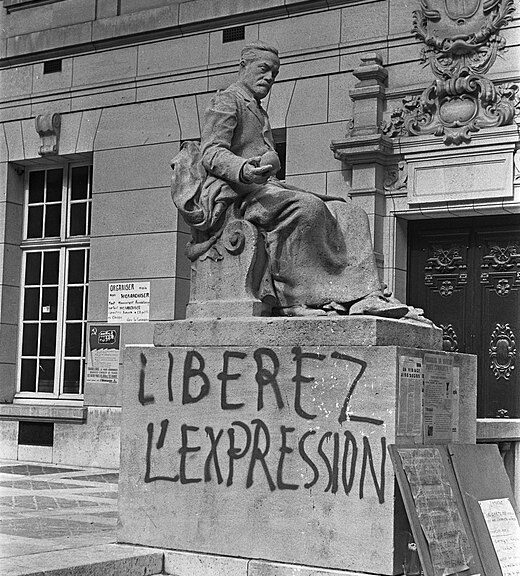 The brick missed Deborah’s head by only an inch and then smashed into the shop window behind her.

She didn’t even have time to be shocked before Sophie pulled her away from the street and into cover behind an overturned car.

Like an angry flash flood, the mob of students pressed through Boulevard Saint Germain, throwing more bricks, and pushing the frantic police back towards the Montparnasse cemetery.

“He – they – almost … ” Deborah suddenly had trouble breathing. She rummaged through her long hair as if on reflex, to assess how hurt she was. But there was nothing. The brick had strafed her hair. But Deborah felt as if it had gone straight through her soul.

“You are all right!” Sophie called, and she was very close by – that much Deborah could tell, even though she herself felt far away as if she was trying to leave her body, to get away from this place of madness.

The students roared on, a few feet away calling for ‘liberté’ but also calling the police names that would have shocked her law-and-order father if he had bothered to learn French before moving the whole family to Paris at the behest of the company.

“They almost hit me,” Deborah finally managed to stammer. “But I am just here to … watch.”

“It was an accident,” Sophie said and held her. “We got too close. Let’s go back to the university.”

“No, I want to go home.” Deborah struggled to keep her composure. She was 17. She was not supposed to die from a brick to the skull. She just wanted to see what all the ruckus was about. “Let’s go home.”

Sophie scowled as if Deborah had suddenly become the enemy that the students were trying to drown in swear words and the occasional barrage of bricks, but she acquiesced even so. She held out her hand as she got to her feet, urging Deborah to take it.

“You are right. And your father wouldn’t forgive me if something happened. Let’s go. The revolution is over for you, ma chère.”

Deborah brushed off her jacket and gazed after the student protesters, who had now moved further down the street. The police were now throwing something back against them. Then there were explosions of white smoke and awful cries of pain from the crowd.

“I just wanted to watch it,” Deborah repeated, looking transfixed at the billowing smoke that resembled fumes from the geysers she had seen in Yellowstone last summer before they moved.

Sophie took her hand firmly and pulled her away. “When there is a revolution going on, you can never ‘just watch’.”