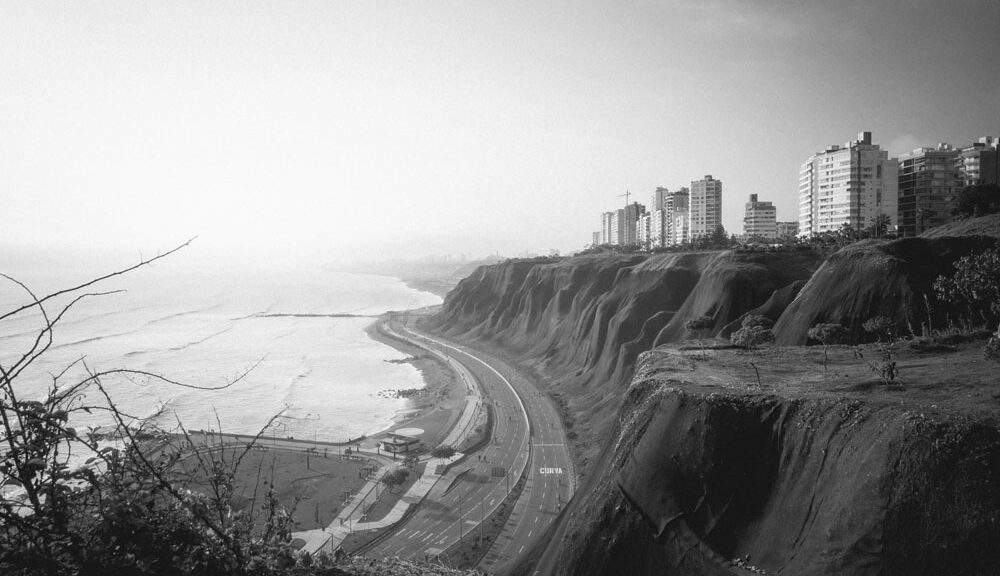 I mean, there’s nowhere else to go here.

The pavement I walked on just ended.

There’s just the cliff and after it – a Pacific ocean that seems to have merged with the gray sky.

So I’m standing at an edge, then – another one.

The cliff is almost provocative in its sheer ugliness: Mud-brown dirt sloping hundreds of feet down straight into the traffic-congested highway, the only fragile fence that seems to hold the back the cliff’s secret desire to collapse, and take with it all the houses perked on here on its edge, and me, crashing right down into the dark depths below the angry Pacific surf.

Lima could have gone on, but it didn’t.

It would have been simple, though, for an 8-million inhabitant mega-city such as this to just go on. After all that is what mega-cities do.

It is a cold, misty morning – like most mornings here in the vaguely greened seaside neighborhood of Miraflores, where I am hiding out.

The only way you can see the morning, is in fact, because the perpetual mist has shifted from black to white.

The mist of Lima is Lima.

You can’t extract it anymore from the city than you can extract the houses or the people. Here you are never really outside, because you are always in a prison of mist.

I have just been walking slowly down one of the streets that run along the cliff, then I turned, and then … stopped. The street ended in oblivion. The asphalt literally has been chewed off by the cliff’s dirt-brown gums.

After it there was just more mist. And beyond that a dim dissolved horizon which I can only just glance through the plumes of smog and fog, being continually fanned out over the sea from the center of Lima as if the huge city is trying constantly to shake off some unpleasant infestation.

Barely two months have passed since the funeral; then I went away – leaving everything behind. And everyone.

It seems, though, like I have already spent forever on dusty roads that cradle the spine of the Americas: Escaping Ohio’s coffin to hitchhike haphazardly through the states down to do a veritable firewalk over Mexico’s burning border; later cooling temporarily in Belizean beach waters; just barely surviving Colombia; seducing in Ecuador; and now … facing a choice in Peru.

There has come a division in me, like the city’s division between ordered blocks of concrete and greedy, chaotic primeval waves: My journey has been divided. Between where I can go next and where I can never really go.

Geographically speaking it is just the division between the continent and the ocean.

So why did I feel the division when I saw that Lima had stopped – right here? Maybe because I hadn’t expected it.

When I read about Miraflores in the coffee-stained guide I picked up at that hostel up in Quito, I figured it would be something akin to a Peruvian riviera.

And after all this time on the road, I longed for something akin to the real Riviera – at least as I imagine it. And I was ready to blow my last cash on it.

So I found this nice, little hotel – El Patio; a place that for once looked as nice as it sounded, but only because I had decided to pay for it. I paid and went quickly to my room, taking a shower and finding my last good clothes, the trousers and the blouse that the señora washed for me yesterday in that little pueblo, the name of which name I have forgotten already.

Then I went ‘out’ for a walk. Feeling like the stranger that I am, I did not really look people in the eyes. Why would they want to look back at me anyway? And more importantly: Why would I want them to? I mean, if they looked too long, would they not see that I came all this way, all these thousands of miles for something that any normal person would not have?

I try to think that that’s bogus, of course, but my heart disagrees with me. Therefore I don’t look people in the eye, on this subdued morning in Miraflores, Lima.

She had died, I had to live but I couldn’t.

Couldn’t die either, though, not anymore than I already had … So I had to go instead. Somewhere.

And then, as the road wore on, I made the one big mistake a traveler should never make. I began to think too much about the journey.

It was not that other people questioned me about my purpose – for God’s sake, no. I rarely spoke to strangers in the North, just as I rarely speak to strangers down here.

And when I did, I rarely told them why I was journeying onward – onward – onward. We mostly just laughed and discussed the number of cockroaches in cheap hotels and the weight of gross Andean women doing the laundry and where to get so plastered for only a few dollars that it would be worth the whole trip.

Yeah, we were fine specimens, all right. Stupid arrogant tourists.

I had sworn, I’d never become one myself. But when you go away like this, to escape something that is impossible to really escape, well … then stupid talk with other people at bars and in buses is the first best pill. That and plenty of drinks.

So I have had plenty of drinks with a whole lot of boys and girls I have already forgotten on my way down here. I drank a lot and talked a lot but never went into detail.

Never a word about why I pulled the plug from law school, left my remaining friends like Nadine, left my mum and then flushed the petty dollars I actually had stashed away for something like this right out the toilet.

No, I never talked about reason I started this journey to a cliff-side at an ugly highway in Lima.

I guess in the end we all reach our own cliff-side in Lima.

We start by thinking we have arrived in an oasis – the part of the city that is actually not the dirtiest, grimiest and most desolate Latin American inferno this side of Ciudad de Mexico. The part called Miraflores. An oasis.

Then we venture just a few minutes away from our last palm in that oasis, to see what’s beyond.

Then we discover that there never really was any oasis. It was just another illusion.

The oasis was surrounded by the same dirt and grime we had fled all along. So the oasis is a prison. A fake. There is no escape from the dirt and grime.

Sure, you can stay in the oasis, but it’s as unrealistic as me staying for the rest of my life in Lima. What would I do? How would I get money? Who would I be with? It would be as crazy as staying the rest of your in a hotel you liked or felt … safe in.

So this cliff-side at It wasn’t even a fork in the road, it was just the place where there are no more roads.

So I had ended up here … out of options. Or so it seemed.

No options. Except maybe a jump.

I have never had such a thought before.

Never thought I would have it.

But that’s what the death of your best friend will do to you, I guess.

I suddenly hear a child laughing. I turn and look.

There is a little girl and her mother, strolling along. Moving to somewhere in the lives. They have lives.

What do I have?